Gussy Makes their Hair Stand Up

A marabou jig used to be our secret up North when the water is cold early in the season or in the heat of summer after consecutive flat sunny days. Those bluebird skies push the biggest smallmouth shallow.

It’s a very visual technique. Trolling motor on high, I’ll hunt for roaming fish and call them in with the jig.

A perfect cast has the jig swimming in front of their face while never letting your jig hit bottom. Impart a slow, steady retrieve to pendulum the bait through the middle of the water column.

A 7’6 medium power fast action spinning rod, the NRX+ 902 paired with a Shimano Vanford 3000 whips a 3/32 hair jig a country mile. I fish that weight of jig 75% of the time, especially when smallmouth will suspend next to a clump of cabbage weed, a log, or a boulder. When fish are shallower, a 1/16-ounce jig stays higher in the water column. The 1/8-ounce comes into play when targeting deeper water, like the Great Lakes, or in windy conditions because it will sink quickly.

Using 8-pound PowerPro SuperSlik V2 in Aqua Green with an 8-foot leader of 8-pound fluorocarbon provides the best visibility for bite detection. When sight fishing or fan casting flats, the bite occurs on the fall. Casting them out and away from the boat and strolling or drifting with the wind is also productive. With the right speed, you’ll get a bow in the line and once you get a bite, the high vis line telegraphs the bite once it tightens.

The marabou jig has the best landing percentage of all time! Tying these jigs takes a lot of patience, time and practice. A #1 Gamakatsu jig hook is small, doesn’t flex and always buries into the roof of their mouth. Setting my drag to slip a little lets me pull on those fish a little more.

Black is the only color you need. Purposely built with a wire keeper on the hook shank, I’ll thread on a ¾-inch piece of a plastic worm. Not only can I cast the jig twice as far due to the added weight, but the hair stays bulked and not resembling a drowned rat.

When a hair jig won’t do the trick, a spybait will often bat cleanup.

I like the translucent baits when the water is ultra-clear. I keep my color selection simple- match the hatch. 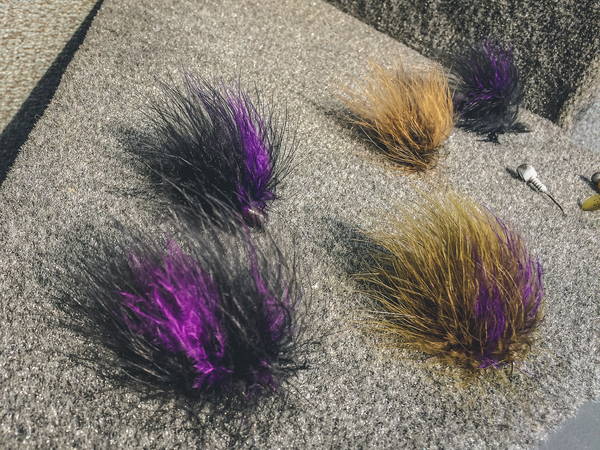 One of the most productive presentations out there, throwing a hair jig this setup will pay dividends.

A Ned Rig is a finesse bait- just not the way I fish it!

Using forward-facing sonar, I know now bass hit a Ned on the fall less than I thought. So, I prefer to constantly pop my bait up off the bottom because the bite occurs once it lands or the first action afterward. A lighter Ned allows the bass to see it farther away, follow it to the bottom, and eat it then.

Some guys want to throw a Ned and fish slow and not cover any water hoping to make fish appear in a place they aren’t. You still have to find fish; this bait can’t make them magically appear!

In the South, I’ll throw it around laydowns and docks for pressured largemouth. 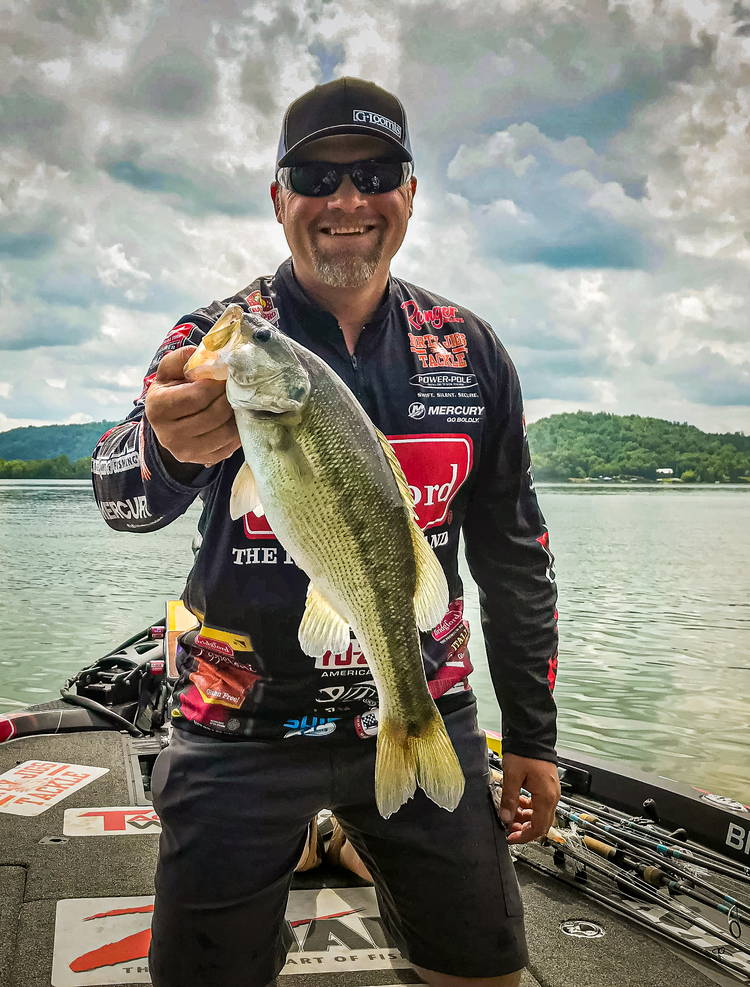 Cold weather also causes largemouth to shut down. Once at Bienville Plantation in Florida, we faced a horrible cold front so bad that most of the lake was iced over. Yet, we caught our fair share, including several 7-pound largemouths by popping that Ned out of the hydrilla.

When the water temperature is in the ’40s, spotted bass tend to suspend and the painfully slow descent of a 1/10-ounce Ned is all that works.

Conversely, in Northern fisheries during the summer, the Ned shines out in high-pressure situations.

Smallmouth like smaller bug-type baits. Reminiscent of a tube jig in its profile, the combination of a smaller bait made with a denser plastic facilitates a more darting action as it falls. A tube jig spirals slowly as it falls. 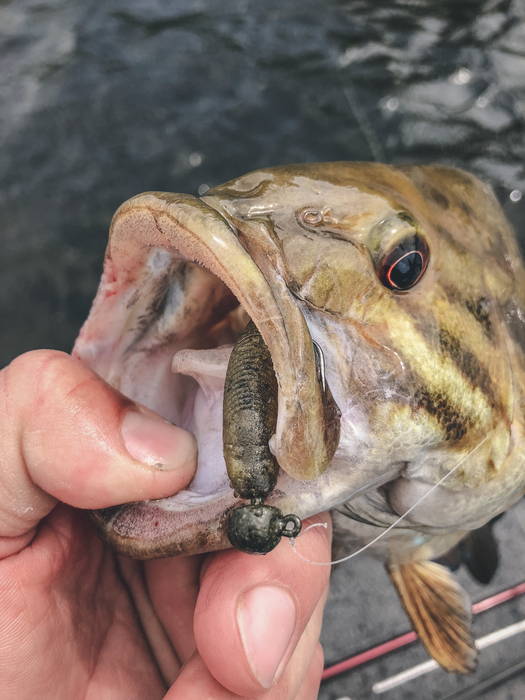 A 1/6-ounce head is a mainstay, but there’s a time for beefing up to a 1/3-ounce Z-Man Ned head. I like the IMX-PRO 831S NRR, an extra-fast medium-light action rod perfect for dropping my bait to the fish I see on my electronics. I feather the line to control the rate of fall. Too light a head won’t fall in time before that fish moves. The softer rod keeps me from straightening or pulling the hooks out.

A heavier rig fishes better on rivers with current, like the St. Lawrence. By maintaining better bottom contact and knowing what your bait is doing, you’ll lose fewer Neds and hook more fish.

When covering water, IMX-PRO 882S NRR is perfect. It’s a longer medium action extra-fast rod that allows me to fish a Ned where most guys have already fished through with a jig or a Texas-Rig. I can make super long casts to skittish fish, but it has plenty of backbone to drill the hook home without overpowering the fish, causing them to jump off.

The Shimano Vanford 3000 reel spooled with 20-pound braided line and a 6-pound fluorocarbon leader joined with an FG knot pairs well. When fishing a heavier head, step up to a 10-pound test leader; those fish aren’t line shy.

For smallmouth, largemouth, and spotted bass, I tend to throw smaller swimbaits because they eat them better and often match the hatch to the forage they consume. 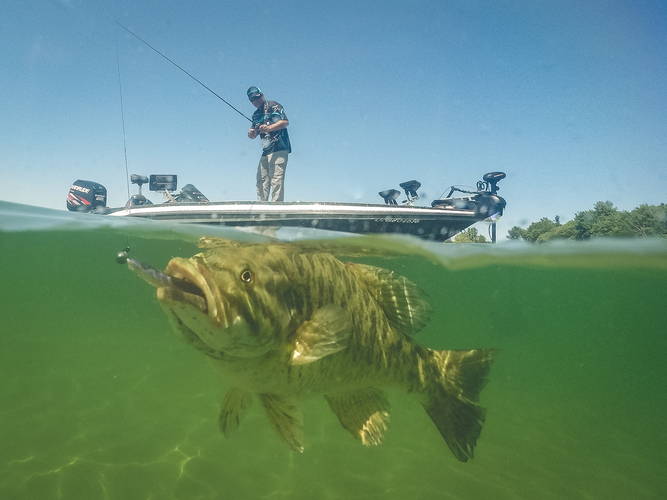 Heavily pressured largemouth are stubborn at best. A small swimbait is enough to trigger a bite, especially when feeding on pin minnows.

For spotted bass, I’ll swim a 1/4 -ounce jig paired with a shad-colored 3.25 Swimbait high in the water column. Spots will swim upward to hit the swimbait, or I’ll let it hit bottom, knowing I’ll get bit soon after. Spots like clean water, especially near dams when bait balls are often present. I’ll also let the bait pendulum around docks, or I’ll fire long casts to cover water.

Smallmouths are naturally suspicious and a small swimbait is unobtrusive. Fish eat fish! That’s why a swimbait out fishes a spybait- and they stay hooked!

Pre-spawn, a 3¼ inch swimbait paired with a 1/8-ounce Outkast Tackle Goldeye Eye head allows me to keep the bait off the bottom and away from the algae-coated rocks. Keeping your rod at 2 o’clock creates a bow in your line that bow, which prevents the swimbait from naturally wanting to swim upward. Since I’m targeting water no deeper than 6-feet of water, I like the head pointed downward and my swimbait moving horizontally through the water column. They won’t chase down much in that cold water and the 1/8-ounce head forces me to fish slower. Because I am already reeling, once the slack is out of the line, I’ll set the hook.

During the spawn, fish the warmest water. On Mille Lacs, I’ll target shallow bays with rock piles, isolated boulders, boulder shadows and transitions. They might nestle into a depression or build a nest beside a rock, but knowing these areas helps me know where to target smallmouth on their way in to spawn and once they’re finished and leave. These flats won’t be deeper than 5-feet of water. The deal is using my mapping to find the tightest vertical stacked contours adjacent to the spawning area.

Pre-and post-spawn, smallmouth move through the first transition outside the spawning area. Often, there are so many fish shallow; I let the wind push me. Be stealthy. The 7’4” length and the extra-fast tip of the IMX-PRO 882S swimbait rod is perfect for launching baits to cover water and getting the bait away from the boat. The lighter action lets them chew it better and I have better control over the bait. I like the Shimano Vanford 4000 series spinning reel's wider spool because it allows the 8-pound Power Pro SuperSlik V2 to effortless fly off the spool. 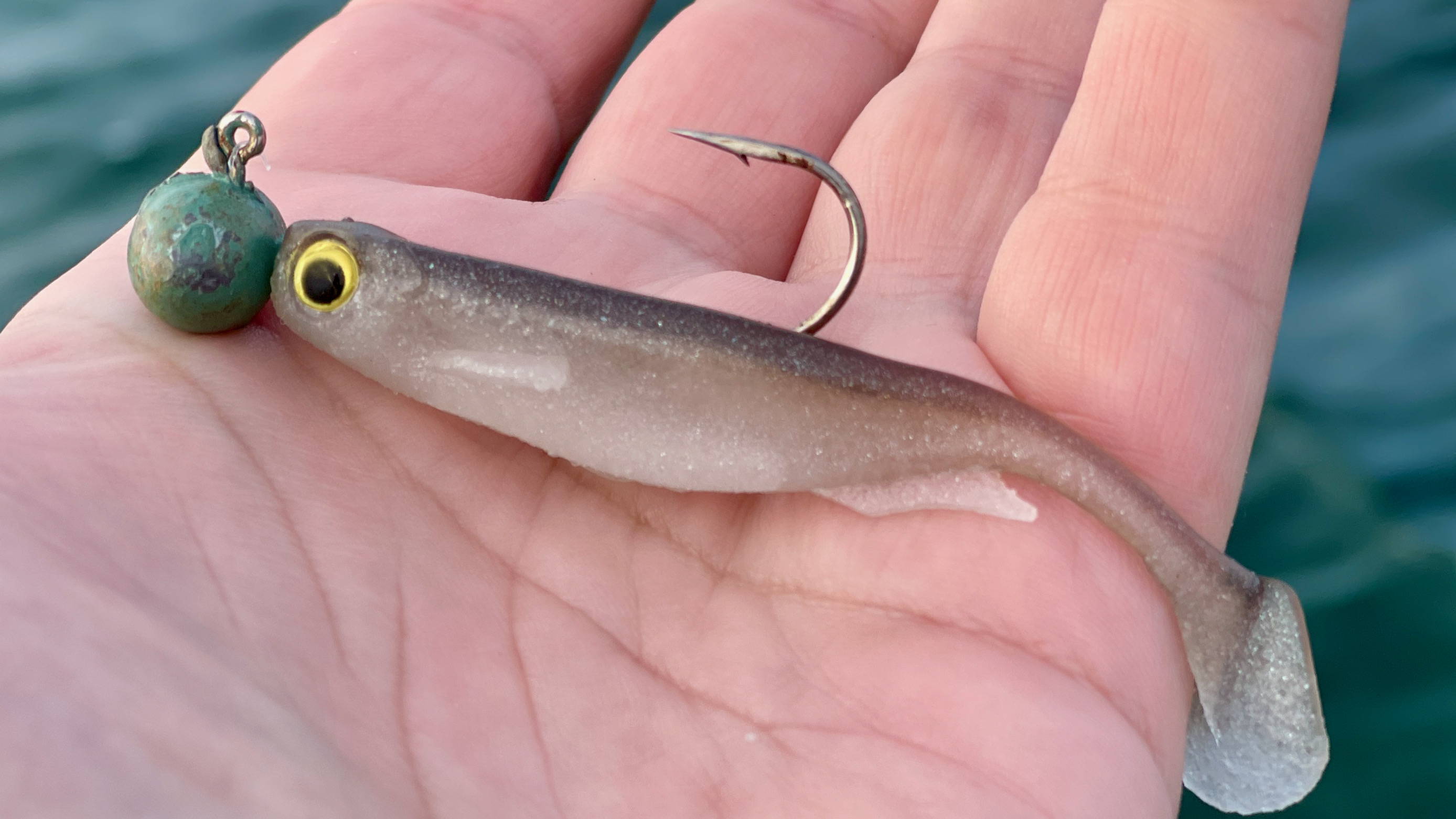 Post spawn, they won’t be in water much deeper than 15-feet. Opting for a ¼-ounce head, I’ll cast out the swimbait let it fall to the bottom to maintain contact with the rocky bottom. When I feel my swimbait beginning to rise, I’ll kill my retrieve and let it sink again. 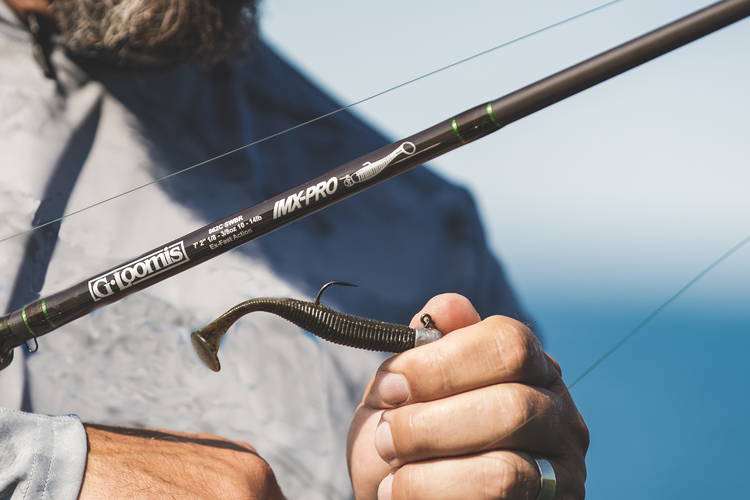 Later in the year, they’ll migrate deeper. A 3/8-ounce head gets the swimbait to the bottom quickly and keeps the bait there. By switching to the IMX-PRO 862C SWBR casting rod, the 6:2:1 ratio forces me to reel slower. A casting rod affords me better lure control. Spooled with 12-pound Seaguar Invizx fluorocarbon, I’ll set the drag of the Curado 200K to slip a little to let them absorb the bite.

I’ll always use an FG knot to join a fluorocarbon leader. In clear shallow water, an 8-pound test works, but once I start making contact with the bottom, I’ll step up my leader to 12-pounds. I do prefer a 20-foot leader to keep the knot in the spool on the hookset. 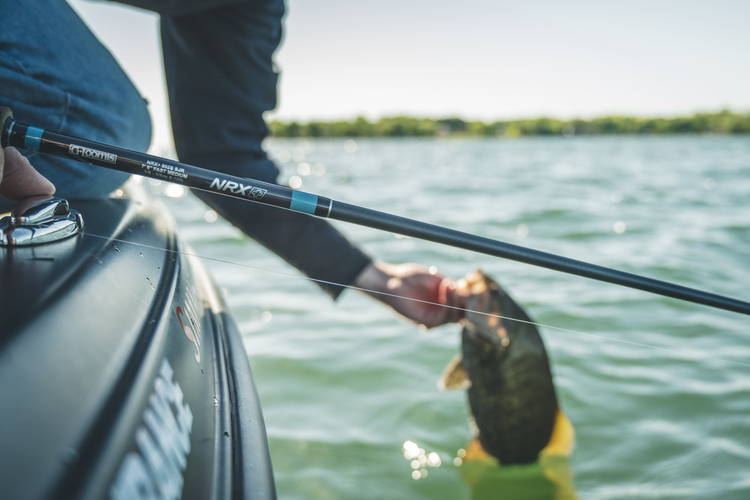