1. What is your favorite technique when guiding for tarpon?

I'm a visual guy and want to see the bite. Tarpon love chasing down a DOA Baitbuster soft-plastic swimbait and smashing it boatside.

I've smashed 120-pound fish on that 4-inch bait with a 7 ½-foot rod IMX-PRO Blue rod. That rod has incredible power. I've also caught several tarpon over the years on a fly, I love that too!

2. What's your favorite rod and reel set-up at the moment, and how does this gear differ from what you'd use for other species?

The power, sensitivity, and balance of the IMX-PRO Blue rods are unparalleled. I fish both live and artificial baits, and I've put the heat to those rods with big tarpon, and we have straight-up whipped them. The blanks allow my clients of varying degrees of skill to make super long casts due to the IMX-PRO Blue's soft tip. Still, it gives them every opportunity to calm the most aggressive tarpon.

I'll pair those rods with the Shimano Saragosa SW 6000 spinning reel spooled with a 40- to 65-pound test PowerPro braided line. This is the reel of choice l when those fish are amped up and trying to smoke that drag. I put too much time, effort, and sacrifice into hooking each fish to leave any element of my game to chance. My clients deserve the best.

3. How has the equipment you use today changed how you've targeted tarpon over the years?

The equipment has increasingly gotten better, which has helped me improve my game and protect the fish. The true game changer is the power in these rods: it enables my anglers to pull on the fish. I am not a fan of fighting fish for long periods.

If you're a "tarpon rookie" on my boat, I'll give you 30 to 35 minutes, but that second one is a different fight. We're using our equipment to pull on the fish to minimize stress to the fish, the fight time, and stress to the angler. At 92 degrees with 92% humidity, no one wants or should be fighting fish for an hour. We put a lot of pressure on the fish to get them boatside for the betterment of everyone involved.

Because of the gear, it enhances the excitement and health of the betterment of the angler as well as the fish's safety by protecting the resource to spawn another day.

The equipment today has made anglers much more efficient and successful. It boils down to having quality gear to make your overall experience that much better. It has nothing to do with a "cool gear factor". When you start breaking down the costs of boat, fuel, ice, and you roll out with subpar tackle, you're only setting yourself up for failure with gear you cannot trust. 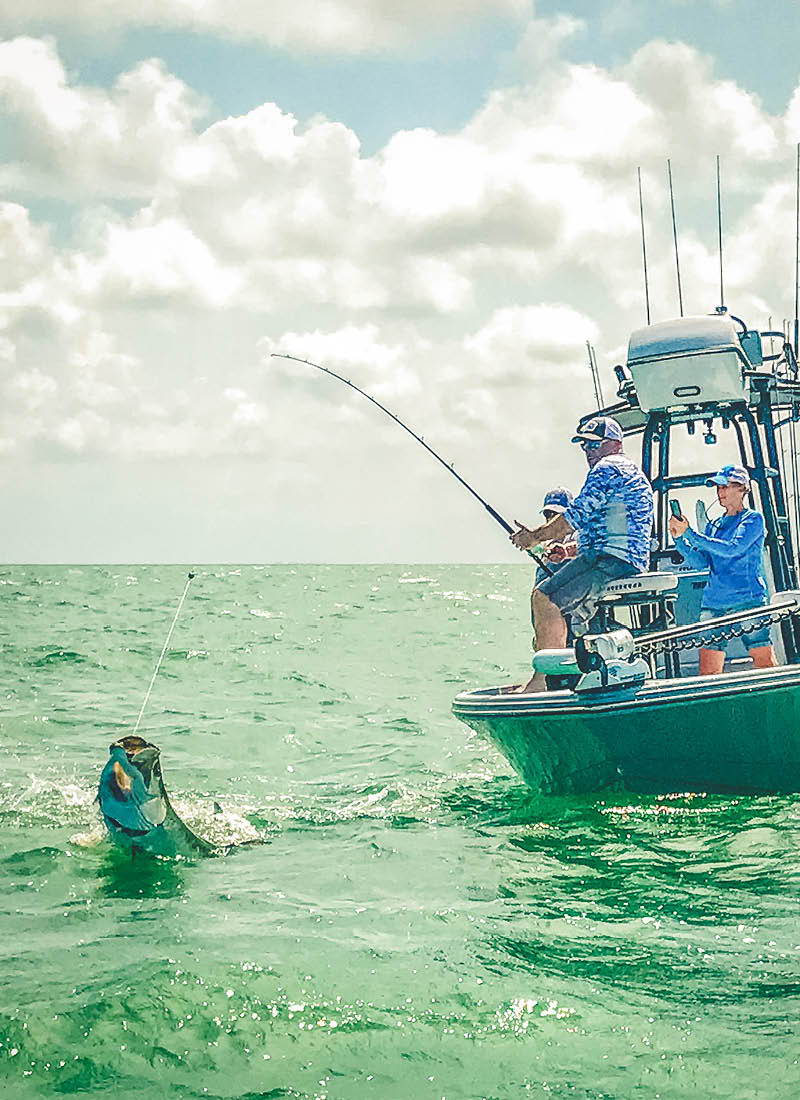 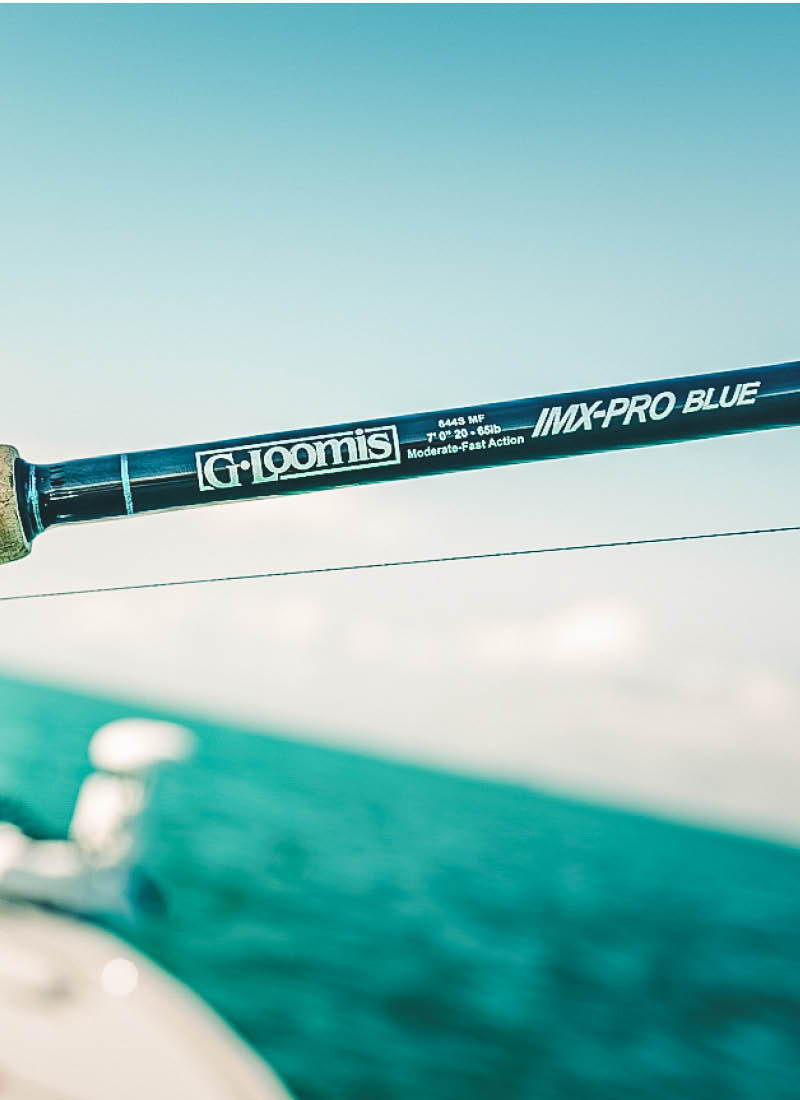 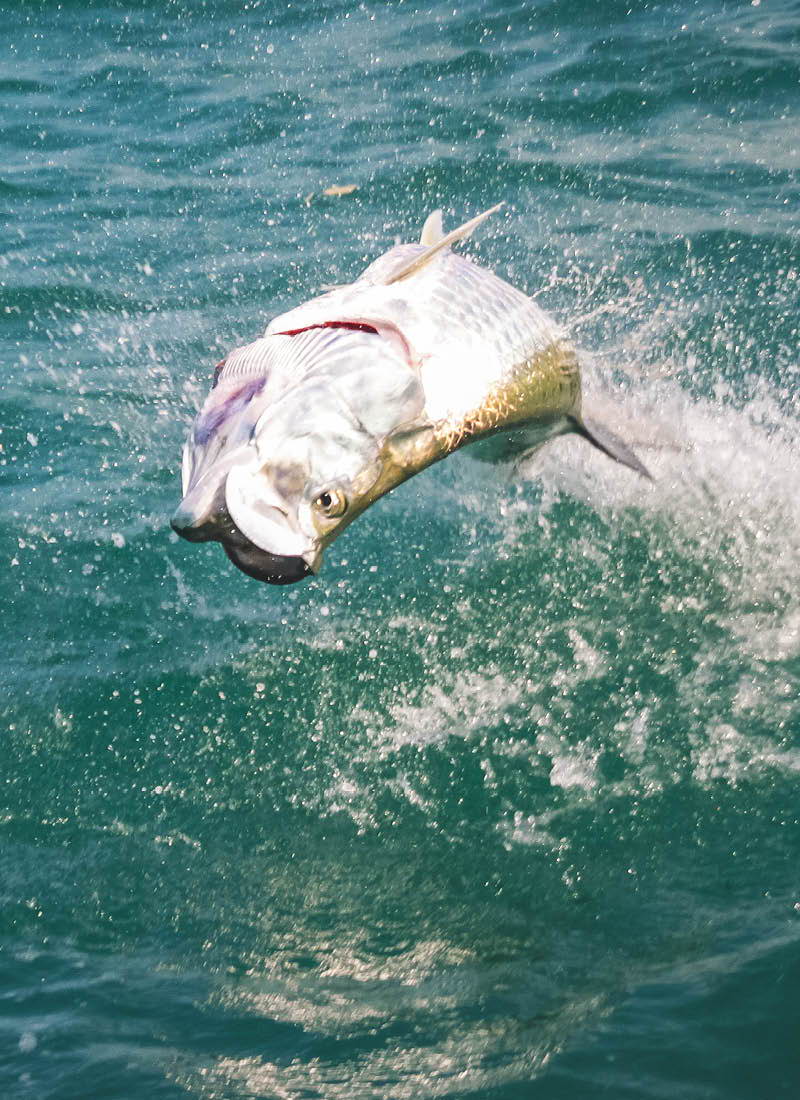 4. Even those that haven't fished for tarpon have heard the term "bow to the king". Why is bowing during a jump so critical to keeping a fish hooked?

Tarpon can throw the hook after shaking their head viciously or jump out of the water and land on the line. When an angler is fighting a tarpon that stays in the water, there's rarely an issue if your gear is up to par.

Years ago, we used glass rods that absorbed power but had no backbone, so you didn't have to bow to the fish. Today, the IMX-PRO Blue packs a serious punch when paired with a reel that has a heavy drag. When you're applying that much pressure, tarpon will summersault on the line if you aren't paying attention...and it will end up bad!

Once they go airborne, all bets are off! In essence, bowing to the fish means you are pointing your rod to the fish as it jumps and until it lands. The angler is trying to absorb the inertia, power, and weight of the tarpon should it land on their line to prevent it from breaking. Years ago, monofilament would stretch one foot for every10 feet you had out. Today, with braided line and fluorocarbon leader, there is no stretch.

5. Do you fish tarpon around structure or more along known routes of travel?

Predominantly, Tarpon set up on contour lines, or they'll hide behind ledges located in the passes. Everyone says Boca Grande Pass flows west to east, but the reality is the tide moves in a boomerang shape around Boca Grande's point. When fishing the passes, drifting crabs past tarpon naturally is a science in itself. Too fast and it will spin, too slow and the fish, know better. They are a much more intelligent fish than we give them credit, and like any species with giant eyeballs, you best be on your game because they are watching you.

For a mainline, we'll use 50-pound bluePower Pro Super8Slik V2 braided line when targeting the beaches. Though a 10-foot fluorocarbon leader line is standard on every rig, the line diameter is dictated by the conditions. Early in the season when the water has a little color to it, 60-pound test will suffice. As the water becomes extremely clear, it’s necessary to run the thinner and less visible 50-pound test into early June. When the bite is super tough, I’ll drop down to 40-pound test, knowing that I'm conceding some power to the fish because we can't lean on them as hard. I'd instead get bit than not.

At Boca Grande Pass, that is a whole different playground. I'll opt for 65-pound Maxcuatro due to the deep water, structure, and those fish run in huge schools. You have to pull that fish away from the group, or they will abuse you and run with the pack.

The tarpon game is ever-changing: just when you think you have it dialed-in, the variables change. New moons and full moons every May and June cause crab flushes, and because we are losing grasses in areas where those crabs tend to want to be, our crab flush isn't as strong as it was 20 years ago.

Tarpon are an amazing fish, and I'm invested in their survival. I handle them safely, with respect, and I use circle hooks purposely. They ensure that the tarpon is hooked in the rim of the mouth, which ultimately protects the fish and ensures post-release survival. Tarpon will not survive because we wish them to, we have to show it through the tackle we use, and,how we fight and release them. We also need to protect the ecosystem they need to survive.