Q: How did you get into fishing?

A: I don't know too many people that don't like fishing once they have the opportunity. Much like hunting or shooting, unless you have someone to mentor and get you into that, it's much more challenging.

My dad was more a hunter than a fisherman, but many of the people I was around were into fishing. Living close to Lake Erie's shores, it wasn't difficult to hitch a ride or be around people that I could fish with occasionally. Early on — and much more frequently — I fished farm ponds and small inland lakes.

Q: When did you get the guiding itch?

A: I grew up in Toledo, Ohio, near the shores of the biggest — and best —walleye fishery in the entire world for the last 40 to 50 years. But where it all started was in Port Clinton, Ohio, where some of my family lived.

As a kid, you just know one thing: that you want to fish. I didn't have a silver spoon or a trust fund, so I started working under some of the best charter captains just to go fishing on rigs that I didn't have or couldn't afford. And the best part, I got paid more than a guy my age working in a restaurant. At 14 or 15 years old, I worked with Jim Fofrich — a legend in the game — who, along with his son, took me under their wing and mentored me.

Still, in my early teens, I traveled with Gary Roach to fish the Professional Walleye Trail tournaments because I was still too young to drive! At 21, I worked for a guide but was under my own deal. At the same time, I was writing articles for In-Fisherman magazine.

Guys like Gary Roach, Al Linder, and Dave Hansen helped me when I started my career. To my knowledge, I was the first guy to offer the educational trips and two-person charters on Lake Erie.

Q: So you were born to be a guide?

A: I'll never forget when Al Linder told me that I needed to get one of those "website deals" because my business's future would be based on teaching people the trolling deal with fishing techniques that were still in their infancy. Back then, fishing with offshore planer boards for walleye was considered way "outside the box" because we borrowed the technique from the salmon fishery.

Al Linder was an extraordinary fisherman: He won a Bassmaster event out of the back of someone else's boat. And when he spoke, you can bet I listened. He said most tourney guys graduate on to bigger and better things away from making a living off tournament winnings.

We had this tackle shop nearby called Netcraft that had a big wooden table. On the blow days — or during the offseason — all the big walleyes guys would come in. I bought the parts for the weight-forward spinners I was making and selling there, and it was only two miles from my parent's house. The regulars finally said, "you are in here so much... why don't you start working here?"

I became their grunt worker. Unknowingly, I was networking with all the big players in the game while also becoming involved in walleye seminars put on by some of the best anglers in the area.

Q: How hard was it to master the art of jigging?

A: I don't think I've mastered it yet. I remember when I thought I was pretty decent. Once you share a boat with a seasoned veteran, you quickly realize you have a long way to go! But, put that same angler in my boat... and my trolling game might be a step above.

Trolling is a science, especially the rod-in-hand is a technique. It is a lot easier to learn the science at home: Learning how deep your gear runs, setting up your rods, calibrating your line counters to run baits at accurate, consistent depths.

The art of jigging is about paying attention to what happens and when it happens — a lot is based on "feel." Jigging parallels trolling in that many clients don't know a fish is hooked for 10 to 30 seconds before they realize it, and by that time, the fish is gone. I think the same is valid with jigging. Many anglers don't set the hook when they should or do so too quickly. Often, they don't know when a fish is on and usually confuse bites with the structure or make the mistake of getting on fish too fast or too slow. Strike detection is crucial, and often that comes down to time on the water.

That's why I use a high-visibility line because a lot of the bites are detected visually. An NRX spinning rod paired with braided line provides maximum sensitivity. It telegraphs what is going on beneath the water better than any other rod. A high modulus rod accurately transmits what the jig is doing and how — and fish react to it. 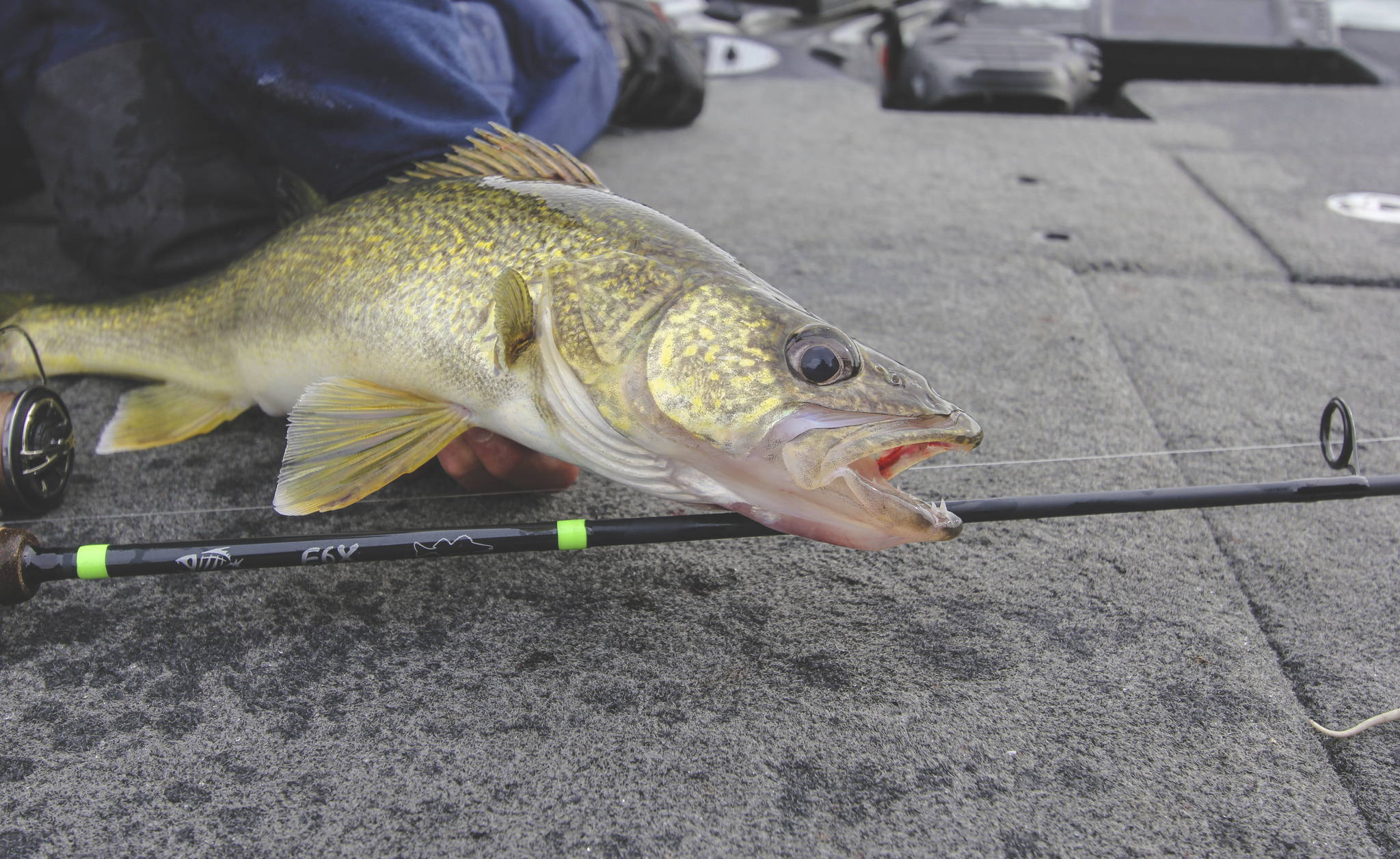 A: Many of the flats I fish are in less than 15 feet of water, so we do a lot of casting. Putting distance between the boat and the fish prevents spooking them and allows for a more natural flowing presentation of the jig.

Each situation is unique. When I'm fishing the Detroit River, you better have a vertical presentation, or you are going to get really good at tying knots!

But if you strictly vertically jig on the Western Basin of Lake Erie, you'll be doing yourself a severe injustice. You'll get spanked by the guys fishing the swing, the downward side of the boat, or fishing semi-vertical.

A: Pre- and post-spawn are vital times to fish a jig on the Western Basin of Erie. It's essential to fish rock piles in 5 to 15 feet of water — and they don't have to be huge. Often, the ideal bottom is just compacted sand that zebra mussels affix to, making it a harder bottom than compacted sand or hard mud.

Unlike an inland lake where walleyes distinctly cycle through pre-spawn, spawn, and post-spawn, Erie has those three stages constantly coinciding. It's almost like a carousel because of the number of fish essential using the same spawning grounds.

The bulk of the fish do their spawning at the end of March and the beginning of April, and it happens whether it's 30 or 60 degrees. Many of those fish feed in the dark with the moon, and the females don't eat during the spawn — they know they have one job to do. But the smaller males sure do. 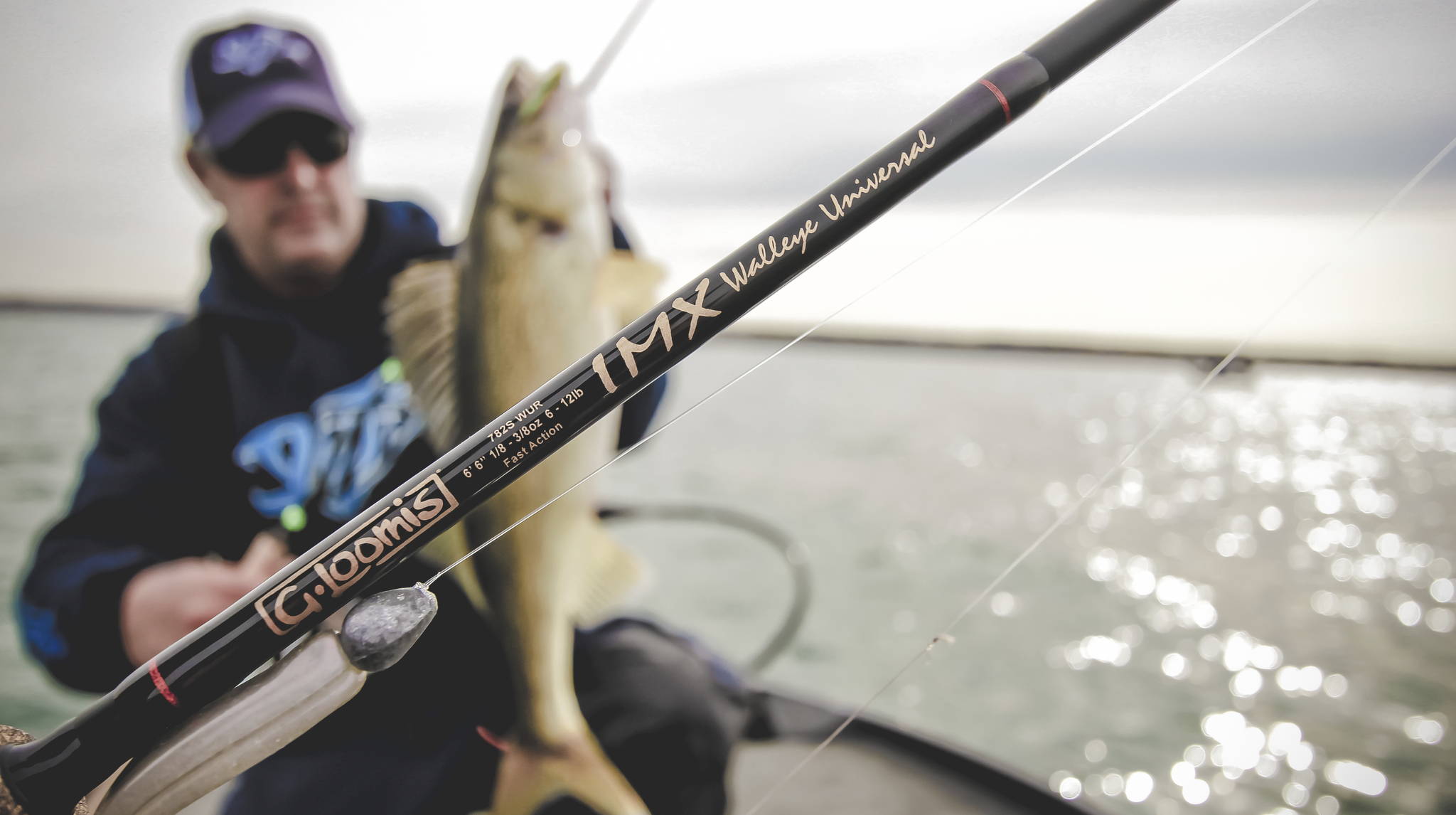 Q: Most guys get rattled by the sight of dirty water and won't even take their boat off the trailer. What makes your mindset different?

A: In the springtime — when the bite gets tough — those males will chew. On the Mississippi River, you can't see more than a foot in most of those areas, yet those fish adapt to that. Western Basin males on the spawning flats are no different, the feeding window is just smaller.

When trolling in water that's 30 feet or deeper, there's a lot of area to cover compared to when fishing in 5 to 10 feet. Deeper fish won't move up or down in the water column, especially if they can't see. By fishing shallower — and if you bang your jig on the bottom — you're putting the odds in your favor.

Q: Don't keep us in suspense; what weapons do you choose for battle?

A: I use the G. Loomis GLX WJR 752S, a fast action 6'3" spinning rod paired with a 1000 or 2500-size Shimano Vanford reel spooled with a 10 to 15-pound braided line. I like a fluorocarbon leader that is slightly heavier to protect against the braided line's low stretch properties as well as against rocks and zebra mussels that may compromise the line. I don't think fish care how heavy the leader material is.

I use a small swivel to join the braided line to monofilament or fluorocarbon leader, and my leader is typically 1 to 3 feet. The cleaner the water, the longer the leader. A uni-knot works best when tying monofilament to the jig head, while a San Diego Jam excels with fluorocarbon. I'll set the drag to slip on the hookset, but it's essential not to horse the fish to prevent tearing the hooks out.

Yes, I still use monofilament...and here's why. I love that G. Loomis GLX walleye rods, but I use a few of the NRX rods as well. Not only are they insanely sensitive, but they have a very fast action. All you need to do to set the hook is flick your wrist because the rod loads immediately. And if I didn't use monofilament, I would miss those bites because I would react to them far quicker than the walleye having the jig in their throat. 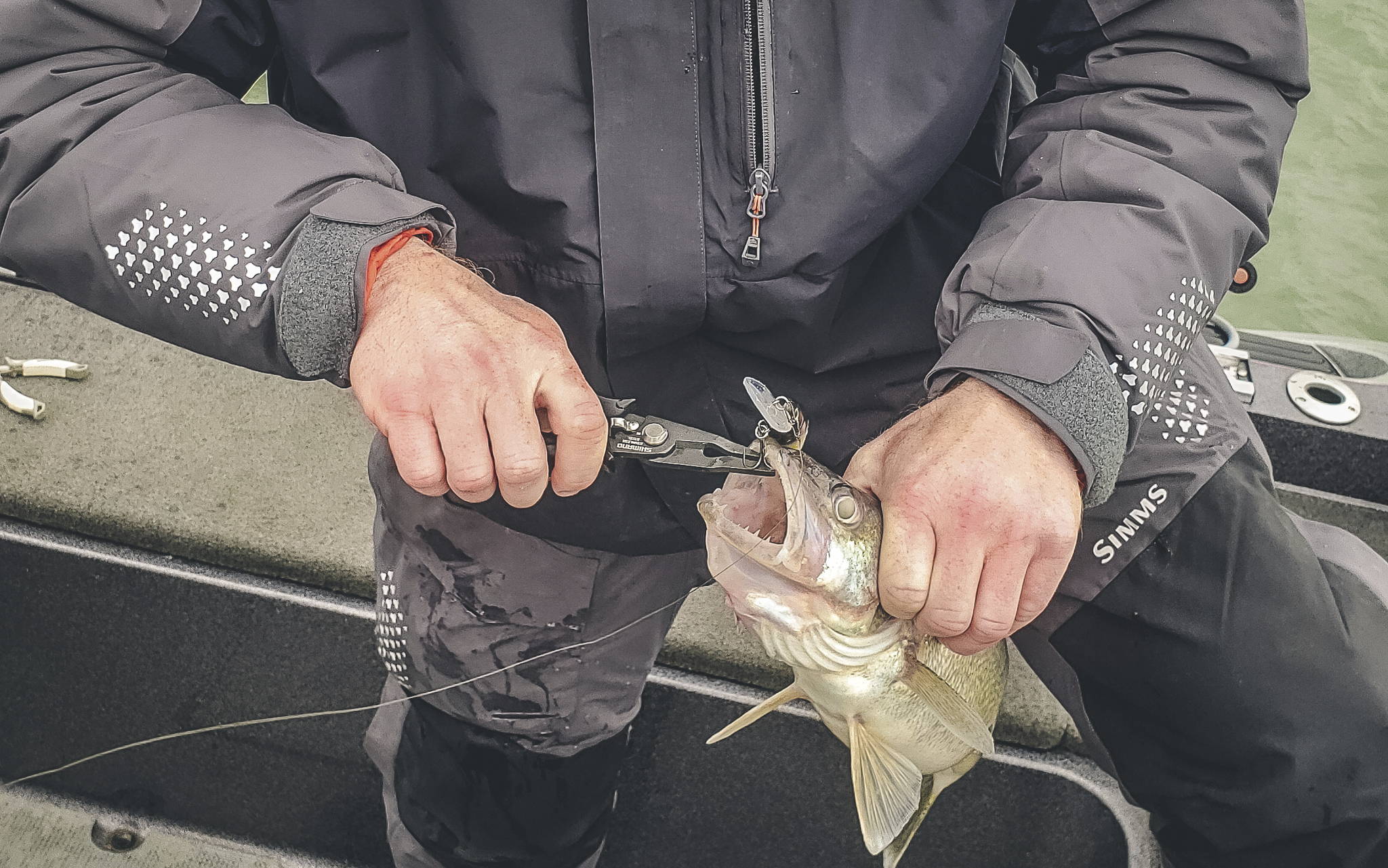 Q: How should an angler stock their jig box?

A: I use many various hair jigs and have been getting some synthetic bucktail jigs tied locally for years. I like the Northland Long Shank Fire-Ball Jig for this and fishing soft plastics because it slows the jig's descent while also adding some color.

A hair jig shows out in 30- to 40-degree water because it expands and fluffs out. This slows the jig's descent, which is integral for success when fishing in cold water. And when the fishing is good, I'll just fish a hair jig — no trailer.

Shad bodies, twister tails, and fluke bodies measuring 3 to 5 inches in length show out. I'm pretty simple when it comes to color choices. When you're guiding four clients at a time, there are so many other variables to worry about than changing and looking for colors.

Jig weight is more important than style because we are thumping that jig along the bottom. My jigs all weigh between 3/8 and 3/4 ounces, and they're ringing the dinner bell.

These fish hide in the crevices and are glued to the bottom — you won't see them on electronics. Sometimes of the boat's increased drift rate with the wind, you will often need a heavier jig to maintain bottom contact. And dragging bottom won't cut it — you'll nick your line and dull your hook point. But you do need to keep pounding those jigs along the bottom...therein lies the art of jigging.

The angler who has several cadences increases their odds of adjusting to the fish as their mood changes, which can sometimes happen hourly. And what works in the first hour of light is different than when the clouds change and are high.

The current creates a slightly different story: A local guy poured a jig on an aspirin head and put big eyes on them in the past. That jig head style cuts the current much better than others.